Our family farm, Fat Turnip Farms was founded in January of 2019, in Kingston, Washington. Our passion is putting our hands in the dirt and growing great food.

Our motto, “Teach the Children”, and the way we farm were greatly influenced by the late George Vernon, founder of Northern Garden of Life in Ashland, Wisconsin. George loved helping people and, through his mentoring programs, teaching young people how to work. We were blessed to be involved with Northern Garden of Life, as well as farm vegetables in the Snohomish Valley for many years.

While much of our harvest is done in much the same way as it would have been 100 years ago, our growing practices are a hybrid of the organic and sustainable movements, coupled with good old-fashioned science and a blend of sweat and dirt. Fat Turnip Farms remains free of GMO seeds, is glyphosate free, and is certified organic. 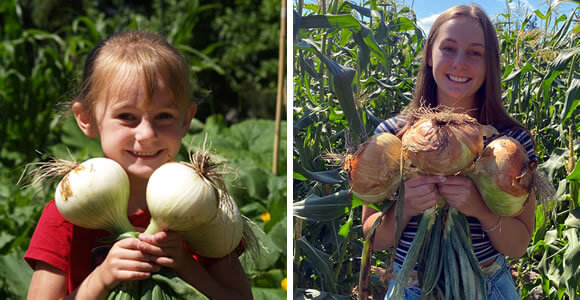 Our daughter in 2010 and in 2020
THE FOLLOWING SECTION  IS A TRIBUTE TO THE LATE GEORGE VERNON, TAKEN FROM THE WEBSITE OF A GARDEN HE FOUNDED CALLED NORTHERN GARDEN OF LIFE.  THAT GARDEN, WHICH WAS LOCATED IN NORTHERN WISCONSIN, CLOSED PERMANENTLY SEVERAL YEARS AFTER GEORGE’S PASSING.  THIS PAGE IS INCLUDED BECAUSE OF GEORGE’S TREMENDOUS POSITIVE INFLUENCE IN THE LIVES OF YOUNG PEOPLE HE CAME IN CONTACT WITH, AND BECAUSE OF HIS PASSION TO HELP PEOPLE.  THE WRITER OF THIS WEBSITE HAD THE OPPORTUNITY TO WORK WITH GEORGE AT NORTHERN GARDEN OF LIFE FOR 9 YEARS, AND HIS INFLUENCE IS STILL FELT TODAY.  IT IS A PART OF OUR HISTORY.

orthern Garden of Life was founded in 2009 by the late George Vernon.  The Garden, as it is called by employees and friends, is a roughly rectangular shaped smorgasbord of fruits and vegetables which are grown and harvested each year for the benefit of the surrounding community. A large portion of the proceeds from the sale of vegetables is donated to the local food bank, The Brick. George always had it in his heart to help people, and with his enormous passion and dedication to gardening and the local community, The Garden became an extension of his personality and vision to continue to serve Christ, even in the latter years of his life.  George always made sure that rows were impeccably picked clean of weeds, and that waste was kept to a minimum.  His booming bass voice could always be heard rumbling across the fields as he encouraged his crew to work hard and stay strong in their faith.

George at the Garden one early summer morning

George doing devotions with the crew

Depending on the harshness of the usually late Northern Wisconsin winters, planting season may begin as early as May 20th, with harvest beginning around the end of July. It’s pretty crazy once things get rolling, but old man winter can show up any time from September to November, and it’s different every year.